Camera #4 films the most activity of the 6 cameras I’m monitoring. It’s located in an ideal spot for sighting animals—on a trail that follows a creek at the bottom of a lush canyon. A wide diversity of wildlife and humans use this trail 24 hours a day. I understand—it meanders through a cool forest of ferns and trees. Even the air feels different here. It’s vibrant: cool and fresh with a faint scent of damp vegetation. This trail tops the charts for beauty. I’m not the only one who loves this spot. Mountain lions, bobcats, coyotes, owls, possum, deer, skunk, rats, rabbits and other humans also gravitate to this special canyon trail.

My favorite trail is vibrant with a wide diversity of wildlife. Photo by Marilyn Krieger, CCBC

Many animals call this canyon home. It’s a safe place for them to live, with an abundance of food and water. On both sides of the trail are what appear to be random piles of sticks haphazardly heaped together around the bases of trees. These aren’t the incidental products of sudden wind gusts. They’re homes—carefully and deliberately built. Most people, including me, hike by these structures without realizing that wood rats have built and live in them.

Everyone can see camera #4. It’s not hidden. Bobcats, lions, humans and dogs routinely check it out. People of all ages wave, pose, perform, make faces and talk to the camera. We’ve captured precious footage of young children dancing and singing. There are also videos of people reading the wildlife study stickers that are taped on 3 sides of the camera. After one little boy’s mum finished reading it to him, the child authoritatively proclaimed “there aren’t any animals here” If he only knew…

A mountain lion patrols the canyon

I receive area-wide lion alerts, sightings called into the county by local residents. A number of these alerts include footage from home security cameras of lions cruising around homes. After each alert I check camera #4 (any excuse to walk my favorite trail). Often I find 2 videos filmed within 24 hours featuring the same adult male lion. One video catches him leisurely trotting up the trail, while another spots him coming back around 18 hours later.

Pumas don’t want to encounter people and will limit their times around suburban areas to late night in order to avoid us. This boy is no different. The camera spots him between 11:00 PM—4:00 AM when there’s a minimum of human activity. Since camera #4 records him regularly, I’m assuming that he is patrolling his territory. He’s beautiful and it’s a gift to see him.

In addition to the lion, bobcats are regulars on the trail. Although their usual MO is to use it at night, the camera caught one last month at 9:54 AM, pausing before he guardedly moved up the trail. 2 seconds later, a jogger with a dog sprinted by. 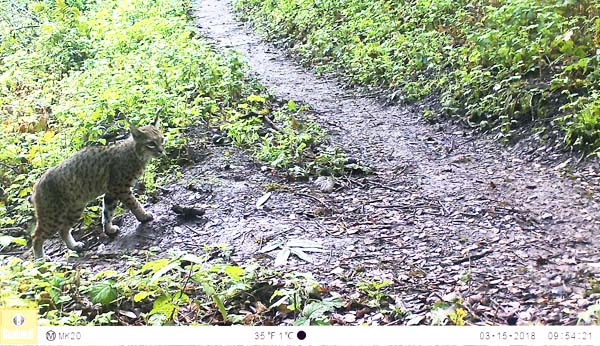 Bobcats use the trail on a regular basis. Photo by Marilyn Krieger, CCBC

Its spring and the animals have been very busy. Check out this bobcat waddling down the path—she looks like she’s about to be a mom. I plan to check the camera every week, in anticipation of eventually catching glimpses of her on the trail with kittens in tow.  I feel like an impatient aunt, waiting for news about the birth of a niece or nephew. Patience is not one of my strongest traits.

Bobcats as well as other large animals are aware of the camera at night. For an instant, the infrared light, triggered by movement catches their attention.

A diversity of species travel the trail

The canyon’s rich resources draw a large variety of animals. Possums, deer, skunks, rabbits, raccoons and a small owl are among those who are regulars on the trail.  Wood rats are also frequently filmed dashing across the trail to the safety of their stick houses.

Almost every night there’s at least one skunk who trots across the trail in front of the cam. Although it’s hard to see them through the dense vegetation, their tails are very distinctive. I love seeing those beautiful tails—on film and from a distance.

This lush, suburban canyon is full of surprises. I never know what camera #4 will show me and it never disappoints me. The videos of animals and people are a delight to see—I enjoy watching lions and pregnant bobcats as much as I am fond of seeing the children hamming it up in front of the lens. The videos are testaments of people and wild animals, including apex predators, timesharing the same trail, coexisting without conflicts or problems.