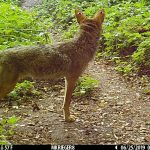 Coyote 09M, like others of his species, is extremely smart. He’s beaten the odds and is thriving in a dangerous and competitive environment. 09M’s one of the lucky ones; in fact he’s now the only confirmed living member of his natal family. Despite being highly intelligent and quick learners, only 50% of coyote pups live […] 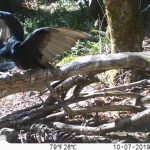 Life and Death in the Canyon Despite the canyon being only 93 acres, hemmed in by homes and roads, it’s a complete eco-system where plants and animals are interdependent. The death of one organism means many others will live. The lesson hit home a couple of weeks ago when a small deer was killed by […] 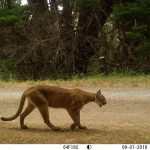 There seems to be less wildlife in the canyon this month. It could be a natural cycle or it might be caused by destruction that is occurring in part of the habitat. Mountain lion This large male puma is a regular visitor to the canyon–he shows up about every two to three months. This time […] 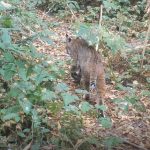 The trail cameras do a great job of documenting the seasonal changes. It’s hot and water is becoming scarcer. August wasn’t as active in the wildlife department as in previous months, but we did film some bobs, Coyote 09M and deer. Along with the reduction in predators, the cameras have only caught a couple of […] 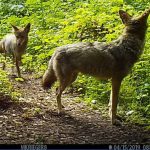 I used to have mixed feelings about coyotes. When I was a child late at night, I loved drifting off to the howls, barks and yips from coyotes—their vocalizations added depth to my sleep. While I felt in awe of coyotes, at the same time I was afraid of them. I grew up hearing stories […]

Predators including bobcats, mountain lions and coyotes who don’t want to share resources as well as those who do, are adept at communicating their intentions through scent marking—to their own as well as other species. And often, they scent mark on top of each other’s mark. It’s not always in the best interests for predators […] 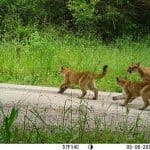 Finally it’s the beginning of summer and the trails are alive with activity—human and animal. Our wildlife cameras are capturing it all, including those changes that are caused by natural seasonal cycles as well as adaptations in animal behavior that are likely influenced by people out on the trails day and night. Summer changes The […] 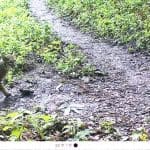 Camera #4 films the most activity of the 6 cameras I’m monitoring. It’s located in an ideal spot for sighting animals—on a trail that follows a creek at the bottom of a lush canyon. A wide diversity of wildlife and humans use this trail 24 hours a day. I understand—it meanders through a cool forest […]

At first it didn’t make sense. It took a little sleuthing for us to figure out what had changed.  For the last few months, camera #2 spied on deer, rabbits, possums and an occasional coyote. It was predictable—I pretty much knew what critters would make regular appearances at night. Something changed a few weeks ago. […]

23 Species From 19 States Lost to Extinction

September 29, 2021. WASHINGTON— The U.S. Fish and Wildlife Service proposed today to remove 22 animals and a plant from the endangered species list because of extinction. They join the list of 650 U.S. species that have likely been lost to extinction.

According to another source: "And it's a sobering reminder that extinction is a consequence of human-caused environmental change," Fahey told the newspaper.

August 16, 2021. While climate change is causing some animals to shrink, a new study shows urbanization is causing many mammal species to grow both bigger and longer, possibly because of readily available food in places packed with people.

Don’t hike so close to me: How the presence of humans can disturb wildlife up to half a mile away

July 20, 2021. The presence of humans, or even the existence of the trails they hike on, can have detrimental effects on wildlife.

July 6, 2021. Large animals cause 20 crashes a day on California highways. Experts say special bridges and tunnels can prevent them and protect endangered species.

July 4, 2021. OAKLAND, Calif. — The Oakland Zoo became the first of its kind to protect its tigers, bears and other animals against COVID-19 using an experimental vaccine uniquely formulated for animals, video released by the zoo on Friday showed.