Life and Death in the Canyon

Despite the canyon being only 93 acres, hemmed in by homes and roads, it’s a complete eco-system where plants and animals are interdependent. The death of one organism means many others will live. The lesson hit home a couple of weeks ago when a small deer was killed by a predator. For 2 weeks, we aimed a trail camera at the carcass to see who benefited from the kill.  Although sad, the deer helped sustain life in the canyon, feeding a variety of wildlife including coyotes, vultures, crows and others.

The carcass provided meals for many hungry animals, including stunning vultures, crows and other raptors. Check out the impressive wings on this vulture—beautiful bird.

Most likely, Coyote 09M and his mate killed the deer. They frequently showed up over a span of 10 days to eat. Although sad, the doe’s death was not in vain.

Humor and frustration on the trail

There were also some light hearted moments in the canyon this month—mostly provided by the deer.

One of the resident bucks is dressed for the season—the first thing that caught my attention was his looking through the hole in the leaf that covered his eye. In addition to this plant bedecked boy, the cameras caught another buck with moss stuck between his antlers. Although I don’t know a lot about the amorous activities of deer, I know it’s rutting season. I’m guessing that he’s a bit frustrated and may be venting by slamming into vegetation. This video was filmed after he was rebuffed by a doe he was relentlessly pursuing.  Or, perhaps he’s using the local vegetation to scratch off the itchy velvet on his horns.

Buck #2 with moss on his head.

Taking a rest—right in front of the camera. 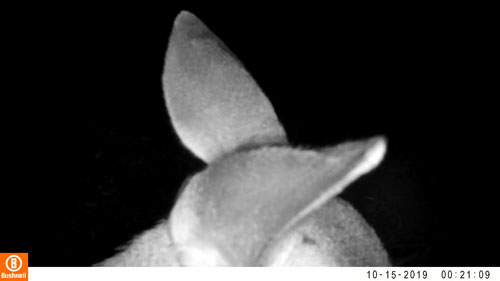 Check out these ears.

This post wouldn’t be complete without an ungulate’s nose.

The usual cast of characters

There are other wildlife highlights this month that are worth mentioning.

09M and his mate are stunning. If it wasn’t for the shape of 09M’s mate’s snout and her tail, it’s easy to see how at first glance, she might be mistaken for a German Shepherd Dog. Someone recently posted on a neighborhood list about a loose GSD. I wonder if this is who she saw.

What a treat—two foxes! The cams, rarely filming them in the canyon, recorded them 6 times in the last 2 weeks. Typically, foxes avoid areas where there are coyotes. I don’t think it’s a coincidence that the last couple of weeks the coyotes haven’t been caught by the main cameras. They’ve been hanging out near the carcass and in an area where there is an abundance of rabbits.

Is she pregnant or maybe she just had a full meal?

The first few weeks of October were full of wildlife highlights worthy of posting. I hope that the last week will be as active. After checking the cameras, I left special Halloween non-food enrichment presents for the animals to find.

Marilyn Krieger, Certified Cat Behavior Consultant (The Cat Coach, LLC® ) and author of Naughty No More! helps solve cat behavior challenges nationally and internationally through on site and remote consultations. Her fascination with cat behaviors began with household cats and quickly expanded to include wild felids.