It’s hard to describe the anticipation I felt last summer as we waited for the wildlife cameras to finally catch glimpses of adorable bobcat kittens trailing closely behind their mum. We knew that we would soon see them because a couple of months before the cameras had recorded a resident bobcat going through stages of pregnancy. The last video in the sequence showed her waddling a few paces, sitting, standing and then slowly making her way up the trail. Soon she would become a parent.

A couple of months before the video showed her in the advanced stages of pregnancy, the mom-to-be had at least one suitor. Although adult bobcats, like most felids, are solitary and self-reliant, they solicit the company of the opposite sex during their breeding seasons. Adult female bobcats are receptive to males for only a few days during their cycles. The whole neighborhood is aware when bobcats are looking for boyfriends because they fervently advertise for them through loud, distinctive caterwauling. In addition to long distance calling, scent marking, scraping and physical posturing helps get the word out. It’s not just the girls who are on the make, adult males also verbalize their desires and ardently scent mark in high profile spots, such as the center of trails.

Both sexes mark using urine and feces—the frequency increases with the urgency to mate. The feces and urine of females contain chemicals that broadcast their receptive reproductive state to available males. They also scrape the ground with their back paws and then urinate or defecate in the scrape. It seems that there is an increase in bobcat feces deposited in the middle of the trail during breeding seasons. Another way they mark is by rubbing objects with their cheeks—there are glands on the felids cheeks and the corners of their mouths that produce pheromones.

Typically, breeding season is between February and April, but depending on the climate and the environment, love can occur any time. When liaisons are fruitful, kittens are born on an average of 63 days later.

New life in the canyon

Shortly before her kittens were born, the expectant mom found a well hidden spot to deliver them. The birthing den was up the side of the canyon, overlooking the creek. It was in a dry sheltered spot, either in a hollowed out stump or a place protected by brush. She chose the location for safety and it was near a rich hunting area. In late May or early June, three adorable bobcat kittens became part of canyon life.

Like all felids, the bobcat kittens were born helpless, relying on their mum for food and warmth. Although their eyes were closed and they couldn’t hear, the neonates were guided to their first meals by the vibration of their mum’s purr. In addition to functioning as a navigation system, purring helps keep kittens relatively undetected by hungry predators. Predators are less likely to hear vibrational purrs, whereas squeaks, meows and chirps are readily picked up by their sensitive ears. 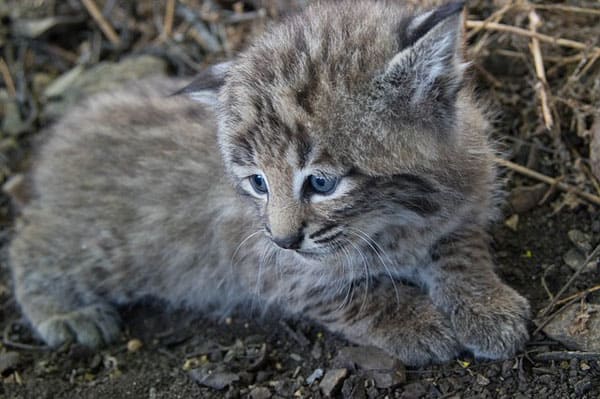 Life as a single parent

Bobcat mums are single parents—they must feed, protect and teach kittens the art of survival without help. It’s not an easy job to do in a dangerous environment. Although well camouflaged by their spotted coats, the little ones are vulnerable and might be found by other resident predators. Also, male bobs, including the kittens’ fathers, are notorious for killing little ones—doing so brings the female into estrus again.

Growing kittens demand lots of nourishment. Typically, they nurse for seven to eight weeks and then begin eating fresh meat.  While mom was away on hunting forays, the kittens stayed close together, not venturing far from the protection of the den. Periodically she moved them to other shelters she had previously scoped out that were safer, cleaner and had plenty of prey nearby.

The kittens were around eleven or twelve weeks old when they started accompanying their mum out on the trail. It’s her job to teach them the lessons that will help them survive in a harsh environment. They had lots to learn.

The youngsters had to be alert and obey their mum’s visual and verbal signals. Their lives depended on it. Flicks from her short tail, ear movements, body language along with chirps, mews and growls signaled when to wait, hide, follow and run. They also served as warnings as well as other communiqués. Check out this video and turn up the sound. Mamma bobcat signals visually and verbally to her youngsters to wait and then to proceed after she does a security check at the fork of the trail.

Not all bobcat kittens survive into adulthood. Our little family didn’t beat the odds. One of the three didn’t make it, possibly falling victim to a coyote. Early one morning, the cameras filmed the mom hurrying up the trail towards the den, carrying a red shouldered hawk firmly in her mouth. A few hours later, a coyote trotted from the direction of the den, clutching the same bird. After that incident, the cams recorded only two kittens.

The canyon kittens, like all felid neonates, weren’t born successful hunters. Hunting is a skill they had to learn. One effective teaching tool is play. In addition to being fun, playing with siblings as well as mom helped them develop coordination and learn the finely tuned skills of waiting, stalking, pouncing and catching prey.

When the little bobs were mature enough, mom gave them another lesson which helped develop their hunting skills. She dropped a wounded woodrat in front of them to pounce on, catch, kill and eat.

The bobcat kittens are evicted

The little family stayed together for about 9-10 months. By that time the kittens had honed their hunting skills and learned how to survive in a competitive environment. School ended, lessons were learned and it was time for them to leave their mum.  She made it clear with growls that they were being evicted—the little female was in estrus again and male bobcats were courting her. Although, sad to watch the two adolescents being rebuffed, her actions may have saved them from having serious confrontations with her male suitors. For awhile after the rejection, the siblings were periodically filmed together on the trail. Finally they dispersed to find their own territories. Males typically disperse further than the girls. Girl bobs sometimes claim areas that are adjacent to their mothers. We hope they’ve learned their lessons well and live long, healthy lives.

This year’s liaisons between the girl bob and her boyfriends were successful. A couple of months ago the wildlife cameras filmed the little bobcat again going through the stages of pregnancy. If she hasn’t already, soon she’ll have another family to protect, teach and feed. We’re looking forward to seeing her again on the trail with a new litter of kittens following close behind.

Sunquest and Sunquist. (2002) Wild Cats of the World (University of Chicago Press)

Join Marilyn for lively discussions about different Feline species on her Facebook page.

Marilyn is a certified cat behavior consultant. Not surprisingly, she’s fascinated by feline behaviors. Her interest in felid behaviors began with household cats, but then after witnessing a puma being killed a few blocks from her home in the suburbs, expanded to include local mountain lions and bobcats. A few years after the tragedy, she joined the Bay Area Puma Project/Felidae Conservation Fund, maintaining trail cameras, writing and helping wherever she can, while learning how urbanization is affecting the apex predators’ behaviors.