“Cats are cats” was the response from my zoologist friend as we compared how bobcats and feral cats select, patrol and live in their ranges. Thanks to our trail cameras we have hundreds of 20 second videos to watch—superb vignettes of the resident bobcats on patrol in the canyon. 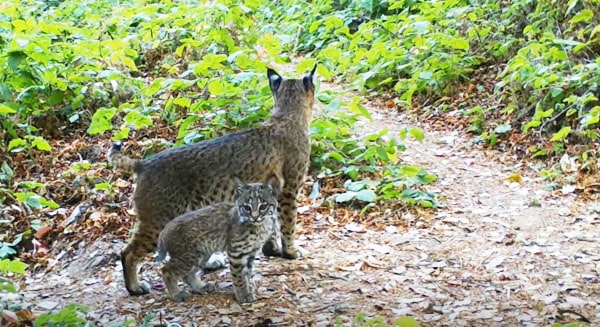 Bobcats on the trail. Photo by Marilyn Krieger/FelidaeFund

Like all felids, bobcats and feral cats are territorial. Patrolling and marking their home ranges ups the odds of surviving in harsh environments. Although there are similarities in how the two species choose and live in them, there are also differences.

Felids don’t randomly choose where to live. They’re very picky—selecting areas that have an abundance of prey or other sources of food. They also look for habitats with lots of vegetation and other natural features that help up the odds of fruitful hunts and temporary cover. The proximity of other predators, roads and people also restrains the location and the size of ranges.

Bobcats and feral cats have special spots in their ranges that they use consistently. They’re the safe, inner sanctums and include well hidden shelters for birthing and raising kittens, secure places for napping, as well as reliable sources for food and water. They’re not in permanent places—often felids relocate and have a number of these safe areas. Predators, a reduction in food, weather changes, people as well as soiled dens are a few of the motivations behind moving operations.

Although bobcat moms have more than one den, they don’t move kittens until they’re about 6 weeks old—unless predators or other threats are knocking on the door.  The surrounding home ranges are buffer zones—they include good hunting spots as well as other resources. Felids, including bobcats and ferals, make the rounds, patrolling and marking their ranges on a regular basis. Marking reduces conflicts with other felids—in theory, less energy is spent defending their home ranges. 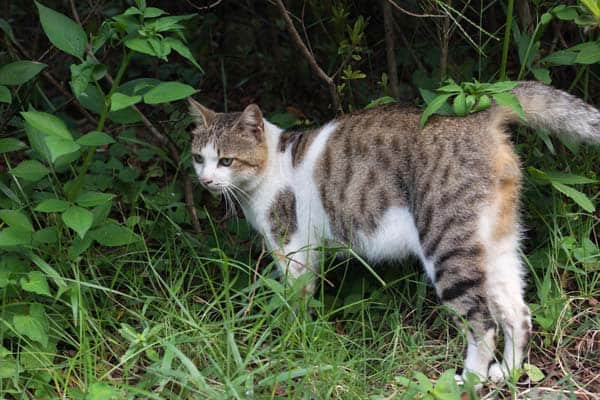 The size of home ranges aren’t fixed in stone. They may be less than a square mile to more than 35 square miles. When prey is scarce, then the areas the bobcats patrol are larger. Hungry bobs have to travel further to eat. When there is an abundance of prey nearby, range sizes shrink. Bobcats are natural prey regulators—when an area has been over-hunted, bobs focus their hunting on other spots in their ranges that are rich in food. This gives prey a chance to rebound. We’ve observed this with our cameras—they recorded a large fluctuation in the population of dusky-footed woodrats after the bobcat kittens were born and a bonded pair of coyotes began patrolling the trail. For a few months last year the cameras filmed an abundance of woodrats. After the bobs and coyotes increased, their numbers plummeted.

Male bobcats usually have much larger ranges than the girls—two-five times larger. For obvious reasons, their ranges overlap the girls’. Bobcat boys being bobcat boys, their ranges include those of more than one female—the 3 cameras on the trail have recorded two adult females and one male.

Girl bobs don’t tolerate boys in their core zones when they’re giving birth and raising young ones. Most of the time females avoid the boys except when they’re advertising for male company.

Girl bobs have less tolerance for their own sex then they do for the opposite sex. But, depending on the abundance of prey, their ranges often butt up against female relatives. They’re masters of time sharing—they patrol and hunt overlapping areas, but never at the same time. Mothers, grandmothers, sisters and daughters recognize each other’s familial scent. Other unknown females who aren’t recognized are driven off.

No one, not even close relatives, are allowed in the inner-sanctums, the core use areas where kittens are born, raised and taught important life skills.

Avoiding run-ins with people is at the top of the list. Busy roads on two sides and homes on the rim of this 93 acre canyon hem in and fragment their habitat, making it difficult and stressful for bobs and other wildlife to access the nearby wild areas. Bobs cross the roads and slip through neighborhood yards late at night and early morning when there is less chance of encountering people. One of our cameras, located next to the road filmed the mom bobcat at 6:00 AM, carrying prey in her mouth as she crossed the street to the canyon.

Whole feral males, like male bobcats, claim ranges that are much larger than the queens. Feral boys being feral boys, their ranges overlap the girls’ ranges. Queens actively avoid toms except when they’re loudly soliciting for flirtatious encounters.

Unlike female bobs who don’t tolerate members of their own sex, feral queens’ share their core territories with other girls. These include colonies populated with other adult females and their kittens. No toms are allowed. Residents are related—they’re sisters, aunts, mothers, daughters and granddaughters. Girls recognize each other through the familial scent that is shared through mutual grooming. Communal living with relatives has many benefits. Queens look after each other’s kittens and there is safety in numbers. They successfully defend the colony from predators and toms. 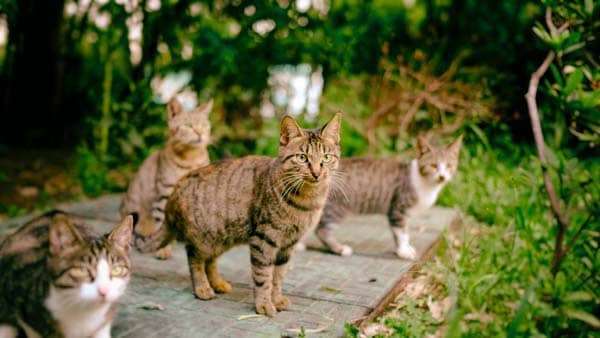 Feral queens’ share their core territories with other girls. Photo by Jerry Wang

There’s a higher density of feral cats living on the urban edge than there are bobcats. Because of their high numbers and limited areas to live, ferals share and overlap ranges more than bobs do. By necessity, ferals have evolved to be more tolerant of each other and they’ve perfected the art of avoidance. They mark key spots in their ranges with excrement and they deposit pheromones by scratching and rubbing objects. The system works most of the time. Through marking they usually can avoid confrontations with each other—unless there are females looking for boyfriends. Then, all bets are off.

Feral cats have a different relationship with urban life than bobcats do. Although, they usually keep their distance from people, they benefit from living near us. Often the best food choices are found around homes, restaurants and other peopled areas. In addition to having a choice of rats and mice who feast on garbage, cat lovers often serve the cats meals on a regular basis.

Most people can live their whole lives without seeing a bobcat in its natural environment, whereas feral cats are frequently seen by everyone. 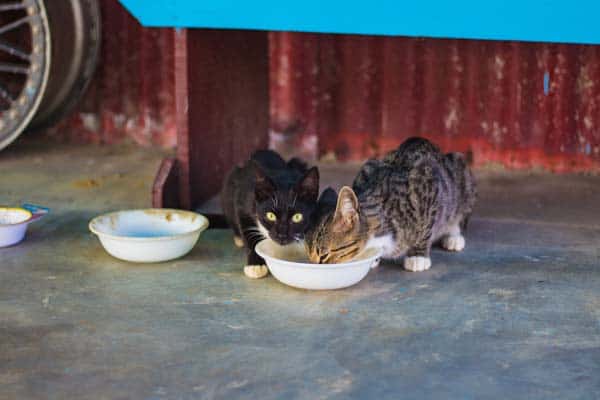 Life isn’t easy for wild cats. Felids, including bobcats and ferals need reliable sources of food, water and safe places to shelter and birth kittens. It’s a competitive world—in addition to challenges from conspecifics, other predators compete for the same resources. In order to survive, wild felids, defend and patrol ranges that are rich in the resources so essential to survival. Although there are similarities, there are also differences in how each species lives and defends them.

Please check out my Facebook page The Cat Coach.  It’s about all things cat—wild and domestic…