San Mateo, California is an affluent, suburban community where residents enjoy mild weather and amenities such as up-scale restaurants and specialty shops. In addition to people, common rats also enjoy living the good life here. They’ve adapted well to the near-perfect climate all year round and the gourmet food that is just a short scurry away. Rats aren’t choosey about where they live—they’re found throughout the world. They’re opportunists, living and dining wherever food is available. Clearly, people don’t want to share their homes and communities with rats and there are those who will do everything they can to eliminate them. Although local residents are becoming more concerned with the health of the environment, some have resorted to using highly toxic rat poisons to rid their properties and businesses of them. Tragically, these poisons are affecting more than rats. 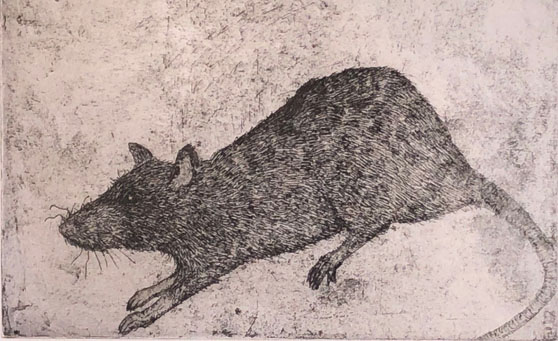 Rodenticides are designed to attract animals—they’re not selective. In addition to rats, pets and wildlife sometimes sample the bait because it smells and tastes good. Sadly, all the animals who ingest it become victims of the primary poisoning—none are exempt.

In addition to killing the targeted rodents, second-generation anticoagulant rodenticides also kills non-targeted wildlife.  Because they kill slowly, rodents keep eating them even after they’ve ingested a lethal dose. When they do die or are close to dying they have many times the fatal dose in their systems. After ingesting the poisons, rodents typically wander off to other areas to die, where they are easily caught and eaten by predators, scavengers and other animals.

Rat poisons travel up the food chain, compromising immune systems and eventually killing those who eat the poisoned animals. California Fish and Wildlife recently released a study where they found high concentrations of second-generation rat poisons in bobcats, mountain lions, coyotes, foxes, skunks, fishers, hawks, crows and owls. The study documented second-generation anticoagulant rat poisons in more than 90 percent of the mountain lions and 88 percent of bobcats that were tested. 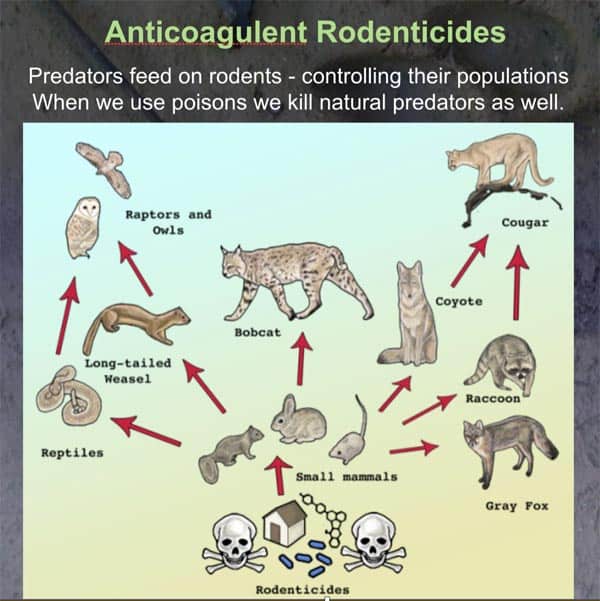 More than wildlife is killed by second-generation rat poisons. Sometimes rats seek shelter in yards and gardens within reach of household pets.

Rat poisons in the special canyon

In the middle of San Mateo there’s a special 93-acre canyon—a wildlife corridor where a diversity of animals, including coyotes, bobcats, an occasional mountain lion, raptors, deer, woodrats and other prey animals live, hunt and patrol.

Rodenticides are taking their toll on the wildlife in the canyon. We’ve recently found dead squirrels and moles in the same location within a three-week period —we’re presuming they ingested poisoned bait that may have been placed next to a nearby building.  Secondary poison has also affected the canyon predators. In 2018 a female mountain lion regularly patrolled the canyon. It was heartbreaking when she was filmed gradually deteriorating, losing fur and becoming thin. This is the last video we have of her; a few months later she died. A necropsy performed by California Fish & Wildlife found she was malnourished and riddled with sarcoptic mange—both are classic signs of secondary poisoning from rodenticides. Most likely, other wildlife in the canyon are also adversely affected by rat poisons.

California regulations in a nut shell

In 2014, the California Department of Pesticide Regulations (DPR), a division of the California Environmental Protection Agency (Cal/EPA), prohibited residential consumers from buying rodenticides that contain four of the active ingredients that can cause secondary poisonings1. They weren’t banned entirely. Certified/licensed professionals are allowed to use them and, even though they are prohibited from being sold to consumers, some homeowners have found creative ways to obtain them. Additionally, consumers can buy poisons that contain first generation ingredients. Clearly, the 2014 law doesn’t go far enough. 4 years later, the reported rates of accidental wildlife exposure to these rodenticides doesn’t seem to have decreased.

The DPR, aware of the problem, is addressing it. A spokesperson for the DPR told me they’ve formally started a process that re-evaluates pesticides. According to the spokesperson, the new process “forces the manufacturers to provide the DPR with data related to second generation anticoagulant rodenticide exposure rates, as well as any resulting risk of adverse impacts to non-target wildlife. It could ultimately mean more restrictions on these pesticides.” The DPR also believes that there should be a variety of other options, besides poisons available.

Although common rats don’t win popularity contests, killing them with super-toxic rat poisons is over-kill.  There are other, effective ways to eliminate rats from the hood without poisoning animals further up the food chain.

One immediate way of discouraging rats from hanging out is to remove what attracts them. Pick up trash, shut and secure the lids of garbage cans and dumpsters and don’t leave food around. Don’t free feed pets outside—dog and cat food provides a smorgasbord for rats. Also, pick up pet feces. Wretched as it sounds, rats gravitate to feces. A little yard maintenance will go a long way: sweep up bird seed, pick up fallen fruit and clear away dead shrubbery from gardens.

Rat proofing will keep the unwanted guests outside. Place screens on open pipes, vents and seal up holes that might double as rat by-ways into buildings. A little preventative action can make a big difference. For in-depth information, check out how to rodent-proof your home.

Pick up trash, shut and secure the lids of garbage cans and dumpsters.

Don’t forget natural predators. They are highly skilled at thinning out rat populations. Rodents are primary menu choices for coyotes, bobcats and raptors (please keep your pets safe inside, especially at night). Depending on property locations, one solution may be to encourage raptors to cull local rodents by installing nesting boxes and perches. The Hungry Owl Project, a non-profit organization, sells nesting boxes for owls, kestrels and other birds. They also have plans available for building them.  Another great resource is Raptors are the Solution

Non-toxic products when used with other safe approaches might also help repel rats. They contain plant-based products such as castrol oil and mint oil. Rats don’t like them and will avoid areas where they’re used. Attics and basements are popular spots to apply them.

Only when these solutions aren’t working consider humane traps2 that kill instantly. These traps should be used only where other animals can’t reach them. Don’t use glue traps, they are inhumane—deaths are long and painful. Additionally, never use live traps. Your neighbors don’t want the rats either and releasing them in open space preserves can create an ecological imbalance and may introduce diseases that are fatal to the native animals.

We are fortunate to live in an area where there are nearby natural habitats. These are fragile ecosystems where many animals who live in them are the unintended victims of poisons.  In order to protect the wildlife that lives in the wild places we need to look at the whole ecosystem and see how our actions, including using poisons, impact the environment. It’s up to us to be responsible, use alternative solutions and refrain from using poisons, especially those that travel up the food chain.

1 In 2008, the EPA declared that second-generation rodenticides containing brodifacoum, bromadiolone, difethialone, and difenacoum posed an “unreasonable risk” to children, pets, and wildlife, and gave manufacturers 3 years to cease selling directly to residential consumers. But it left a gaping loophole by exempting large-quantity sales (such as farmers) and tamper-proof bait boxes used by exterminators. Predators, scavengers, and pets are no less poisoned if they eat rodents that consume bait from sealed boxes or bait set out by farmers—Zara McDonald, President, Felidae Conservation Fund.

2 Other safe alternatives include single- and multiple-entrance snap traps and electrocuting traps.

Join Marilyn for lively discussions on her Facebook page