My favorite canyon is only 90 acres in size; it’s surrounded by buildings, roads and all the trappings of urbanization. Despite its tiny size and suburban location, it is rich with many species of wild animals and native plants—it is a complex, working eco-system where all the players are interconnected. Three trail cameras faithfully document this inter-connectedness as well as the dramas and struggles the wildlife in the canyon encounter every day. 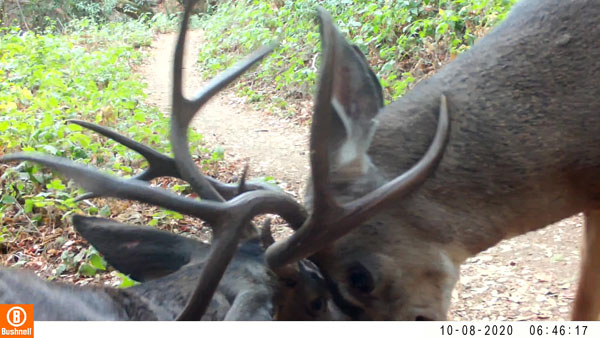 During the months of September, October and November, the cameras recorded enough wildlife activity to see the effects that natural and manmade events have on the canyon eco-system. Devastating wildfires, drought, dogs running through sensitive and vulnerable habitats, poisons, apex predator changes and the season greatly impacted all the canyon residents.

Mountain lions aren’t new visitors to the canyon. The cameras have filmed puma activity here since they were set up three years ago. Until recently, pumas were recorded walking the trails and occasionally marking about every three months. The canyon has probably always attracted them because of the abundance of their favorite food—deer.

The first mountain lion I wrote about was “Slim”, she died after she ingested second-generation rodenticide. After her death, other lions occasionally ventured into the canyon. That changed in August when the devastating wildfires drove the animals to seek safety from the deadly smoke and flames. Many found sanctuary in the canyon and by necessity, had to share the 90 acres with the already established residents. Last August, one male puma found the canyon an ideal spot to hang out for a few months—there was an abundance of deer as well as places to shelter. Since 90 acres is too small of an area for a mountain lion, he’d travel outside the canyon into the neighborhood late nights and early mornings. On November 25th, his regular appearances stopped.

I received a text late on Thanksgiving evening. It was a short text, stating that there was a dead mountain lion on Interstate 280, not too far from the canyon. We searched the freeway for hours without finding the carcass.  At first light the next day, I continued the search, walking the area, looking in the underbrush, but with no luck. It’s possible that the body was picked up by CalTrans the day before. Sadly, since Thanksgiving, none of my trail cams or the neighborhood security cameras have filmed the canyon mountain lion on his usual patrols. Although, I’m holding out hope that I’ll see him again, the odds are that his life was prematurely cut short on Thanksgiving Eve. Tragically many of our beautiful mountain lions along with other extraordinary wild animals lose their lives on the highways.

The trail cameras are usually packed with videos featuring bobcats. I’ve learned to recognize individuals from the unique patterns of spots on their legs. Earlier this year, a young resident female, who was born in 2018, had three kittens. This may have been her first litter, only one kitten survived. The other two may have fallen victim to other predators, vehicles or second-generation rodenticides. Kittens are vulnerable.

Bobcats, like most felids, live alone, hobnobbing with other bobs in only a few circumstances. Not surprisingly, when females are in estrus they hang out with the future fathers of their kittens. Bobcat moms have difficult jobs. They must keep their kittens safe, provide food for them as well as teach them important survival skills necessary for living in a dangerous world. It’s hard work and the mums have to do it alone. The little families usually stay together about 9-12 months, then the adolescents disperse, leaving mum’s protection to look for their own territories. Often when kittens disperse, siblings stick together for awhile, than finally go their separate ways.

The resident bobcat in the following video knows she’s not alone. Check out how she is walking and glancing to the left. Look at her tail, especially when she starts to crouch down. At the end of the video there is a second bobcat that appears at the upper left of the screen. I’m fairly certain that this is an admirer.

The canyon has always been full of deer –there is an abundance of vegetation to munch on as well as a creek to drink from. Although the deer attract coyotes and mountain lions, it’s worth the risk for food.

Fall is usually a dramatic time for deer, especially for mature males. It’s rutting season; bucks have an increase in testosterone and the does may come into estrus. Mature males are amorous and challenge other competing males for the affections of the does. One of the cameras was in the right place at the right moment and filmed a violent encounter between two bucks and boy did they get into a rumble. It’s rare to catch such extraordinary action.

Bucks don’t fool around—these are violent fights that often result in injuries that can end in death. One of the bucks sustained a serious injury to his side. I hope he survives.

Disappearance of Coyote 09M and his pack

The presence as well as the absence of apex predators influences all of the resident and transient wildlife. It’s not a coincidence that when the canyon cams repeatedly film mountain lions, they don’t film coyotes. Most likely, not wanting to confront a puma, the coyotes moved outside the 90 acres favoring a safer, open space. Soon after the male puma started favoring the canyon, Coyote 09M, his mate and puppies disappeared. I hope they are safe.

Although 09M has not been seen, we filmed a fascinating sequence of a coyote hunting an underground rodent not too far from the canyon. Coyotes are amazing. Their hearing is so acute they can hear rodents scampering and squeaking in their tunnels deep underground. The first video shows the coyote hearing the rodents—note how he turns his head to listen.

After the coyote is certain that there is a possible meal under his feet he starts digging. The whole sequence is about three minutes long. Hunts aren’t always successful—he didn’t catch a rodent this time.

More wildlife in the canyon

Since 09M and his pack have moved out of the canyon, other animals are either moving in or feeling bold and venturing out more. Foxes are now running up the trail almost every night. Check out that tail!

There is always an abundance of squirrels, but this poor squirrel is furless. He might be suffering with notoedric mange or inflicted with a genetic condition or perhaps he has a fungal infection. He seems to have fur only on his tail. We also have videos of a squirrel with fur on his body but not on his tail.

Thank the Dusky-footed Woodrat for the preservation of the canyon. Because of them, there can be no development here. These precious animals are listed as a California Subspecies of Special Concern. And, they really are special. After 09M claimed the canyon they were rarely seen. Although bobcats and foxes also dine on them, since the coyotes have vacated the canyon, the woodrats are frequently being filmed.

The cameras show how busy this little canyon is. Every day people walk and jog on the narrow trail that follows the creek through the center of the canyon. Although they enjoy spending time in this small natural space, most of the people are unaware of the rich drama that is continually unfolding around them—how can they know? The wildlife in the canyon instinctually adjusts schedules and routes in order to avoid humans. Because of the images from the cameras we can see some of the dramas and the impact of natural and human-made events on the sensitive eco-system.

Marilyn is a certified cat behavior consultant (The Cat Coach, LLC). Not surprisingly, she’s fascinated by feline behaviors. This started with household cats and then after witnessing a puma being killed a few blocks from her home in the suburbs, expanded to include local mountain lions and bobcats. A few years after the tragedy, she joined the Bay Area Puma Project/Felidae Conservation Fund, maintaining trail cameras, writing and helping wherever she can, while learning how urbanization is affecting the apex predators’ behaviors.