Not too long ago the trails in the little canyon in San Mateo County, California were rich with a wide diversity of wild animals including animal species that are designated as California Species of Concern*. Until recently, the trail cameras filmed lots of animal action—a large number used to patrol, mark and play on and close to the trails. It was common to record family groups of bobcats and coyotes as well as an occasional puma and lots of deer. Something happened that changed the canyon into a place that is now devoid of wildlife. The number of wild animals recorded on the memory cards has gradually dwindled down to just a few skunks and one bobcat. This disturbing trend of a decrease of wild animals is not unique to our canyon trails. Local and national nature preserves and parks are observing similar trends.

I created a spreadsheet, comparing videos from one camera during the same 13-day period in 2019 with those from the same dates in 2021. The data tells the story, and it is not good. It’s a tragedy to see the canyon trails, once a paradise vibrant with a diversity of wild animals, changed into a ghost town.

It probably isn’t a coincidence that at the same time there’s been a dramatic decrease in wild animals, there is a substantial increase of people, bicyclists and off-leash dogs that are racing through the sensitive habitats. People’s response to Covid19 is most likely behind this upsurge of activity. Comparing the footage from the 13 days in 2019 to the same period in 2021, it’s noted that in 2019 there was only one dog off leash, 18 walkers and one bicyclist filmed in the canyon. It’s a different story in 2021. During the same period, 62 dogs ran off-leash, 499 people walked the trail and there were 33 bicyclists. Most likely, the consequences from the increased usage, especially from the dogs who are allowed off-leash is significant enough that many animal residents have vacated. Unfortunately, Coyote 09M, his mate and pups have disappeared. The last puma was filmed in November and the last coyote was recorded in October 2020. And during the recent 13-day period only a couple of bobcats, one deer and a few skunks were filmed.

Many of the people who are accompanied by their four-footed companions are responsible dog people. Their dogs are leashed, and their excrement is bagged and removed. As a rule, they control their dogs and don’t let them run off the trail. Thank you for being mindful and doing your part in preserving the canyon and attempting to keep it safe for its wild inhabitants.

Unfortunately, most of the dogs are uncontrolled and race off the trails. All of these dogs have people trailing a distance behind them. During the 13-day study period in 2021, 62 dogs were filmed running off-leash while only 40 sported leashes. The off-leash dogs tore through the canyon, chasing deer and other wildlife and destroying dusky-footed woodrat homes.

The dusky-footed woodrat has been designated a species of special concern. This special mammal lives in the canyon and is the main reason that the canyon is not allowed to be developed. Their homes can be 60 to 70 years old—and up to 6 feet high. 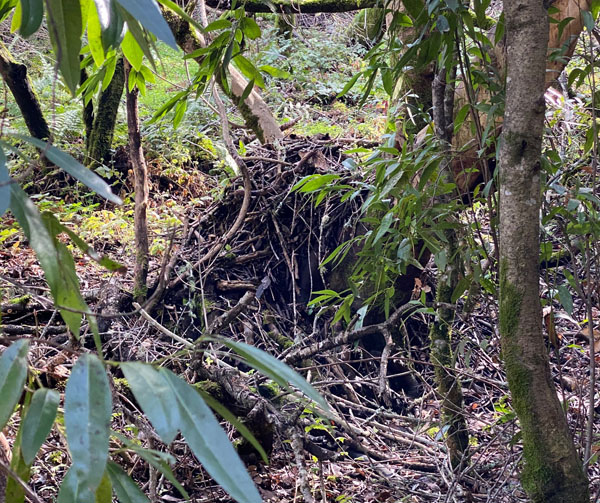 Although it took years for dusky-footed woodrats to construct this home, it probably took less than a minute for it to be destroyed. 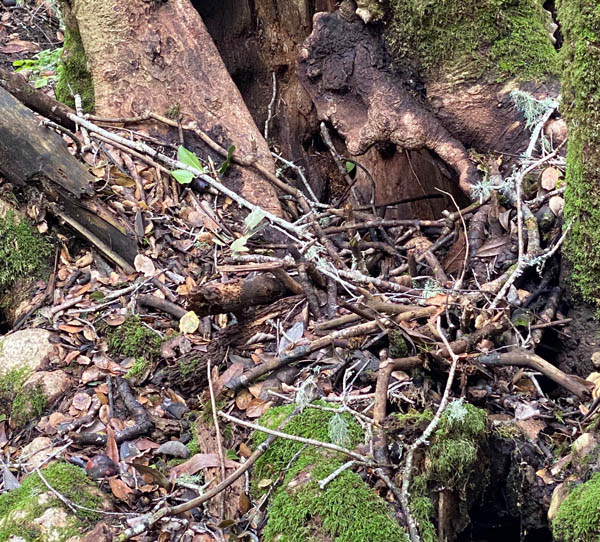 The wild animals have left

The increase of people and uncontrolled dogs may not be the whole story—there might be other factors that also contribute to the wild animals vacating the area. Although correlation does not imply causation, based on the comparison of videos from the same time periods for the two years as well as the reports from other nature preserves and parks, the upsurge of people, off-leash dogs and bicyclists are most likely the primary reason for the wild animals to now avoid the trail.

I realize that people want to see me post videos of the latest wildlife that uses the trails. I can’t post any for you simply because there aren’t any. Although the wild animals are conspicuously absent from around the canyon trail, every week we have hundreds of new videos that are populated only with people, dogs and bicyclists. The cams are purposely aimed at an angle to avoid recording faces—we do see legs, knees and shoes. And the cams regularly film people engaged in a range of mostly healthy activities including walking, running, exercising, singing and dancing. Sometimes unexplained events are also filmed such as these people carrying shovels. I hope they are using those shovels to fill in the areas on the trail that now have erosion issues and that they aren’t removing native plants. And why move the stick?

Thousands of videos filmed in the canyon since 2018 chronicle the usual seasonal cycles of the wildlife. Unfortunately, they’ve also recorded a huge decrease of wild animals on the trail. Based on the data comparisons from the two years, it appears that the consequence of increasing human activities, especially dogs running loose into the fragile habitats has driven the wild animals to abandon the areas around our canyon trails.

Marilyn is a certified cat behavior consultant (The Cat Coach, LLC). Not surprisingly, she’s fascinated by feline behaviors. This started with household cats and then after witnessing a puma being killed a few blocks from her home in the suburbs, expanded to include local mountain lions and bobcats. A few years after the tragedy, she joined the Bay Area Puma Project/Felidae Conservation Fund, maintaining trail cameras, writing and helping wherever she can, while learning how urbanization is affecting the apex predators’ behaviors.

She is also an author and educator. Her book Naughty No More! focuses on solving cat behavior issues through clicker training, environmental changes as well as other positive reinforcement techniques. She gives presentations throughout the United States as well as writes columns and articles for a variety of venues. She is also frequently interviewed for print and online publications. Additionally, Marilyn is a frequent guest on television and radio and has appeared, along with her Bengals and Savannah Cat on Animal Planet, CBS, ABC, KGO and others.