I’ve never been particularly partial to rodents who resemble rats. In fact, I try to avoid them. That changed after one of my wildlife cameras filmed a number of surprisingly adorable, industrious little rodents gathering sticks and leaves late at night. This was my first introduction to the fascinating dusky-footed woodrat. (Neotoma fuscipes).

These little guys are also called pack rats and trader rats. They live up to the labels because they will drop whatever they’re carrying in order to pick up objects that are more appealing. They’re especially attracted to things that shine. Although, at first glance, it’s easy to confuse these busy little dusky-footed woodrats with the common rat (Rattus rattus), they’re not closely related.

They’re officially named dusky-footed woodrats because of the sooty gray colored fur that’s on their feet, chests and sometimes adorns their little faces. They sport tails that are roughly the length of their bodies. Unlike rattus, who have naked tails, theirs are slightly furred.

There are 11 subspecies of woodrats. One, the riparian is endangered; another is listed as a California Subspecies of Special Concern (annectens).  The annectens calls the canyon home. Their special status is partially responsible for saving the canyon from becoming a subdivision. Developers were eager to build homes on this prime land, but thankfully, county planners and conservationists ruled that the canyon has to be left as a conservation easement. In return, 11 parcels of land on the canyon rim are allowed to be developed into homes. I’m thankful that the majority of the 93 acres will remain untouched and wild. 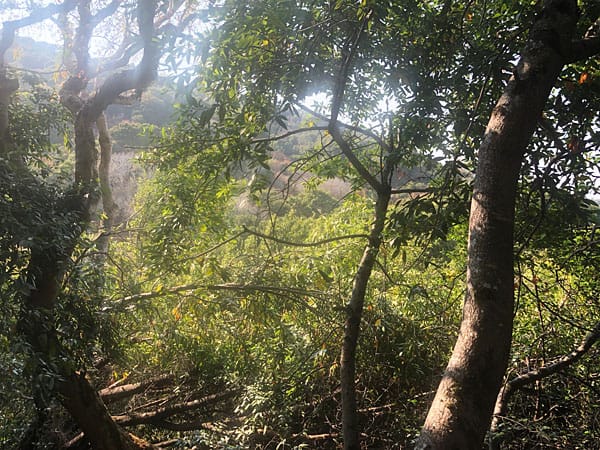 The canyon can’t be developed because of the dusky-footed woodrat’s endangered status. Photo by Marilyn Krieger, CCBC

Dusky-footed woodrats are industrious, smart and clean. They build elaborate stick homes that are the human equivalent of mansions. These structures are built to last—some have been around for 70 years and are up to 7 feet tall. They’re constructed out of twigs and branches and are usually built around the trunks of bay laurel trees. Sometimes they’re also located high up in the trees—penthouse suites with commanding, expansive views. 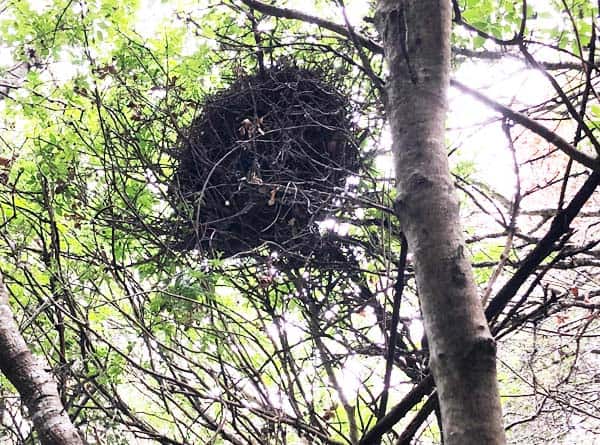 Dusky-footed woodrats build homes at the base of trees as well as high in the branches. Photo by Marilyn Krieger, CCBC

To the untrained eye, it looks as if sticks were haphazardly thrown together to form chaotic piles. They weren’t. The structures are elaborate with multiple stories and an abundance of rooms that include resting chambers, nurseries and pantries. There are a number of larders in the homes, each used for storing different types of food and treasures—separate ones for fungi, others for acorns and bark and some are delegated for leaves. Storage rooms are also designated for stashing shiny objects, such as keys, pens and foil. These stick houses also have back entrances as well as separate structures that function as latrines.

The stick mansions are weather proof. The walls and floors of the rooms are covered with bark which keeps them warm and dry in winter. Additionally, many of the chambers are lined with gnawed bay leaves which act as a natural fumigant, helping to reduce parasites. The leaves have a pungent, almost medicinal smell—apparent after rubbing a couple of leaves between my fingers. It’s not surprising that woodrats construct most of their homes around the bases of bay trees. 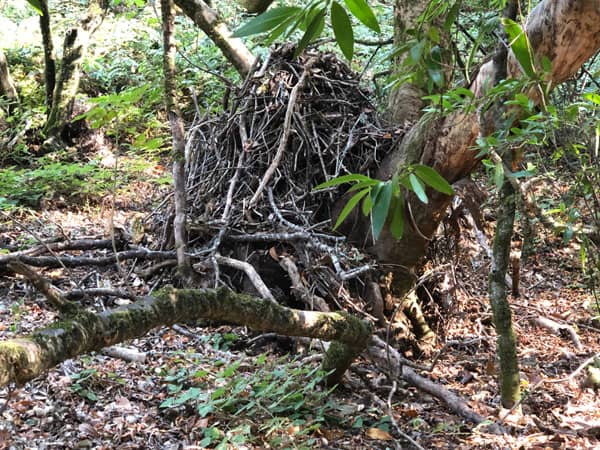 Woodrat homes are elaborate with multiple stories and an abundance of rooms that include resting chambers, nurseries and pantries. Photo by Marilyn Krieger, CCBC

Some woodrats also have satellite homes. They aren’t quite as large as the primary dwellings and may function as safe havens to retreat to when there are predators nearby. One of my cameras is strapped to a bay laurel tree that supports a secondary home.

Only females and their pups live in the stick castles. Adult males aren’t permanent residents. The largest stick dwellings are typically the homes of the community’s senior females. After they die, they’re usually taken over by other females.

These little guys have to be busy. It takes a lot of time and effort to build and repair their homes. Sticks, twigs, leaves and large branches are gathered, dragged and carefully put into place. I’m amazed at the size and weight of some of the branches that are incorporated into these amazing structures.

Woodrats are matriarchal. The females choose who to mate with, usually favoring the same male companion every year. Although adult females live alone in their mansions, they’re social with the neighbors. Homes are built near each other, forming woodrat neighborhoods.

Important part of the ecosystem

There’s plenty to eat in the canyon. Dusky-footed woodrats are vegetarians, feasting on fungi, leaves and other vegetation that is readily available throughout the year. Poison oak is especially tasty—the trail has an abundance of poison oak that is kept in check by hungry woodrats. They, in turn provide nourishment for predators which helps keep their population in control. Bobcats, coyotes and raptors rely heavily on them for sustenance. Mountain lions will sometimes supplement their diets with woodrats as well.  It’s a delicate balance.

I never thought I’d become fascinated with rodents, especially those who resemble rattus rattus. Although they look like rats, dusky-footed woodrats differ in a number of ways. These include: being habitually clean, building elaborate, multi-chamber homes, collecting objects, living in matriarchies and some sub-species are endangered. These industrious rodents are also an important part of the canyon’s ecosystem and need to be continually protected.

Here are my sources. Unfortunately, some of my sources didn’t list their sources:

Woodrats: A Home for the Holidays by Matt Dolkas