Today’s a sad day. Another mountain lion died, hit by a vehicle not too far from the canyon. I’m worried that the victim may be the big male we’ve been monitoring on the canyon trail since early this year. The one who died tried to cross the freeway at 10:00 Friday night. Perhaps the lion was chasing a deer or dispersing or looking for a mate. We’ll never know. If it turns out it was the canyon lion, then he’s the second of the two mountain lions we filmed on the trail who was unintentionally killed within a year. It’s a tragedy.

The wildlife cameras filmed her in March of 2018, the first week we set up the camera in the canyon. She was beautiful—a stunning female mountain lion walking down the trail in the rain. She made more appearances after that, usually once a month. Although the canyon was a relatively safe place to visit, she was mostly drawn to it because of the abundance of her favorite food—venison. She didn’t stick to the canyon though; she occasionally toured the surrounding communities. Neighborhood security cameras filmed her making the rounds, usually late at night or before dawn.

Her name was Slim. She earned her moniker because her tail was thin, due to a lack of fur. A captain in the local police force who loves wildlife named her and it stuck. We compared Slim sightings, tracking her as she moved through her territory. She was a pleasure to watch. One day she walked into town, right in the middle of the residential district; a nice neighborhood with manicured lawns and sidewalks. Someone looked out their front window and instead of seeing the familiar kids riding their bicycles to school and people leaving for work, they saw a mountain lion strolling up the street.

California Fish and Wildlife, BACAT and the Santa Cruz Puma Project were called and quickly responded. Streets were cordoned off and residents were instructed to stay inside their homes with their pets. Slim was tranquilized, weighed and given a quick health check. She then received an ear tag and a tracking collar. Her health wasn’t great—she was malnourished and had mange, which explained the furless condition of her tail. After taking her vitals, she was placed on a truck, transported back to the open space and released. 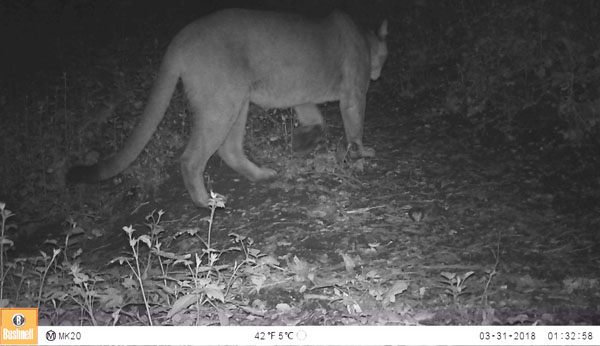 Slim continued to frequent the canyon. Sadly, the canyon cams filmed her deteriorating—it was heartbreaking to watch. She lost weight and fur. The last time we saw her was at the end of July. A couple of months later she died. A necropsy performed by California Fish & Wildlife found she was malnourished and riddled with sarcoptic mange—both are classic signs of second-generation anticoagulant rodenticide poisoning. Some months earlier she must have eaten an animal who had consumed poisoned bait or ate another poisoned animal. The anticoagulant rat poison, traveling up the food chain, compromised her immune system and finally killed her.

California Fish and Wildlife released a study documenting high concentrations of second-generation anticoagulant rat poisons in predators in California. More than 90 percent of the tested mountain lions and 88 percent of bobcats have the poisons in their systems.

For months the canyon was missing an important player—a mountain lion. Then about six months after Slim died, our cameras filmed a male lion on the trail. The three canyon cams caught him, sauntering up and then back on the trails. He was the largest puma I’ve every filmed.

The large lion became a regular on the trail, marking his territories by scraping the ground with his back feet and defecating in it as well as by spraying. He makes the rounds every 2-3 months and sometimes he sticks around for a few days. It’s easy to understand why he visits the canyon—it’s full of deer. It’s good he comes by—he, like all mountain lions, is important for the health of wild eco-systems. When he eats, many others do too. 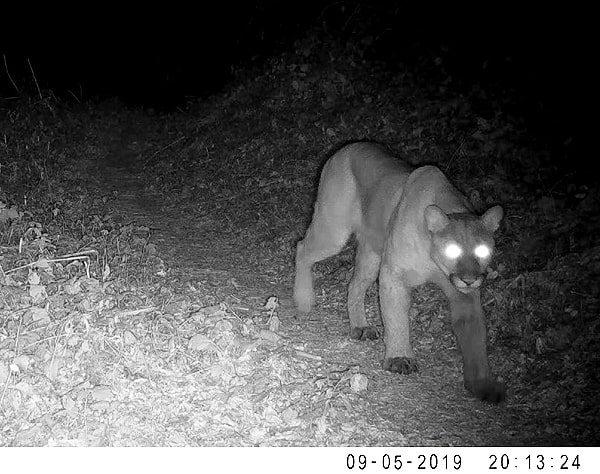 Mountain lions generally kill around one deer a week, which is enough food to last a few days. Lions don’t eat the whole deer in one sitting; they enjoy many meals every day over the course of a few days if left undisturbed by humans. Between meals, they cache the remains in a shady spot, covering it with leaves and debris. In theory, this makes it harder for other predators to discover the carcass and it helps keep the meat fresher. Although it may work to some degree, even I, a human with limited smelling capacity, knows when our lion has cached his meal near the trail.  I assume that our local carnivores, including raptors, coyotes, and bobcats can also easily detect the remains and help themselves to it when the canyon lion isn’t around. All eat well when a lion does.

We have footage of Coyote 09M racing down the trail with a deer head clutched firmly in his mouth the day after our lion had a successful hunt.

Like clockwork, the lion visits the canyon every two-three months. This is the last video we have of him from last week. He doesn’t look as robust and healthy as he did on previous visits. I hope, like Slim, he didn’t eat a poisoned rodent.

A couple of days after he was filmed last week, the mountain lion was killed on the highway. Although I treasure all of them, the canyon lion has a special place in my heart and I pray it isn’t him. Too many of these magnificent animals have become the unintentional victims of urbanization. Some are killed on roads and highways, others poisoned by second-generation rodenticides. Something needs to be done to stop the killing.

*Update: I needed to know if the mountain lion was our boy, so I pestered lots of people for information. It isn’t good news no matter how it’s sliced—it’s heartbreaking when lions are killed. My persistence paid off. The puma was a female: it wasn’t the canyon lion. Although I’m happy to hear this, I’m also sad.

Marilyn is a certified cat behavior consultant. Not surprisingly, she’s fascinated by feline behaviors. This started with household cats and then after witnessing a puma being killed a few blocks from her home in the suburbs, expanded to include local mountain lions and bobcats. A few years after the tragedy, she joined the Bay Area Puma Project/Felidae Conservation Fund, maintaining trail cameras, writing and helping wherever she can, while learning how urbanization is affecting the apex predators’ behaviors.