The wildlife in the little canyon, like in other open spaces that are squeezed in by urbanization, must adapt and adjust to shrinking habitats that are increasingly fragmented by highways and buildings.

Predators, being territorial, need lots of open, wild acreage to live and hunt in. Additionally, some predators, such as mountain lions live solitary lives and in most circumstances don’t tolerate other lions. It’s a challenge for apex predators to navigate the dwindling open areas without encountering each other.

Bobcat on the trail

At the rim of the canyon, trees are being cleared from the building sites while large equipment removes earth and pours foundations for future homes. Although the county has mandated the canyon below remains wild, the noise and chaos along with a slight reduction in acreage, is impacting the wild residents. Although the canyon still provides the animals sustenance and shelter, their routes have changed along with the times they use the shared trails.

Marking is an essential way that predators, including bobcats, pumas, foxes and coyotes share the shrinking landscape. Animals distribute their pheromones/scent through urinating, defecating, rubbing and scratching objects and the ground. Through marking, individuals are identified along with their territories, state of health, age and when they passed by. Wild animals also mark to advertise for mates.

Marking helps territorial predators safely avoid each other in dwindling habitats. Perhaps marking increases with the decrease of space, enabling predators to successfully share the wild without potentially dangerous encounters.

Foxes are notorious for marking with feces in the middle of trails. The last couple of months the cameras have recorded this fox, along with it’s mate, cruising through the canyon—stopping periodically in the middle of the trail and pooping.

A few hours after the fox left his calling card, a resident coyote trotted up the trail, ran by the feces, hesitated, turned around, checked it out and then urinated on top of it, leaving his scent. Although marking is a typical behavior, predators may be engaging in more of it as they adapt to living in shrinking habitats.

Specific smells attract animals. The original “Obsession for Men” had the reputation of being alluring to felines. Lions, bobcats, jags and other felids would rub and mark areas that were saturated with it. There was a good reason for their obsessions with Obsession. The original fragrance contained civet musk scent, harvested from the anal glands of civet cats. The fragrance currently is formulated with a synthetic version of the scent and civets are no longer abused for the pheromone. The downside is that the new version of the perfume isn’t as intriguing to felids. I experimented and sprayed the stinky stuff on a couple of areas that are popular with our resident felids and canids. They all walked by without a glance or a sniff. The only reaction to the perfume was from a little boy who wrinkled his nose and wanted to know what the cloying smell was.

Pumpkin pie spice proved to be more lucrative. I sprinkled two different types of the spice on the trail. An adolescent coyote and a few deer were especially intrigued by the scent. Although last year the bobcats showed an interest, this year the cameras didn’t film them reacting to it.

An adolescent coyote was curious. He spent about 5 minutes investigating the spice.

Does were also drawn to the pumpkin pie spice. Although the cameras recorded mature bucks walking past the spiced up spots, none stopped to check it out.

Living in the hood

Novembers’ highlights wouldn’t be complete without videos of a some of the permanent residents.

Coyotes, being versatile, easily adapt to living near people, in some situations they thrive. The construction hasn’t put too much of a dent in the lives of 09M and his mate. They continue to hunt and patrol the canyon, with one visible change. 09M now only has one ear tag. It’s not known how he lost the other one. It may have been pulled out in a fight with another animal or by playing rough with his mate or perhaps he snagged it on something sharp like barbed wire or a branch.

Something has caught 09M’s attention. He held this position for three minutes before continuing up the trail.

The canyon’s resident bobcats consistently use the same trails for creek crossings. It’s easy to recognize individuals because the shapes and placement of their spots are unique to each cat.

It’s hard to tell what the evening catch is. It looks like a weasel or a ferret. The bobcats have been filmed occasionally catching and dining on them. It’s a mystery why this one wasn’t eaten.

This boy has been hanging out in the canyon for more than a year—he has an impressive set of antlers.

The month wouldn’t be complete without a special tribute to California’s unofficial state mollusk—the banana slug. They have a tendency to show themselves during the winter months, sometimes hanging out in groups. It’s impossible to catch them on video because they move so slow… 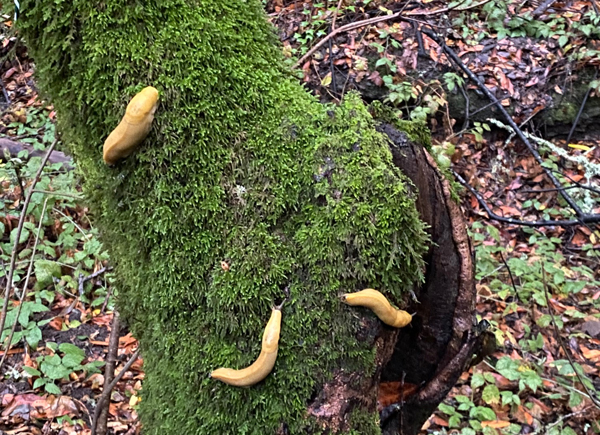 Her fascination with cat behaviors began with household cats and quickly expanded to wild felids.

Join Marilyn for lively discussions about cats, wild and domestic, on her Facebook page