Coyote 09M, like others of his species, is extremely smart. He’s beaten the odds and is thriving in a dangerous and competitive environment. 09M’s one of the lucky ones; in fact he’s now the only confirmed living member of his natal family. Despite being highly intelligent and quick learners, only 50% of coyote pups live past their first year—most fatalities occur on highways and roads. 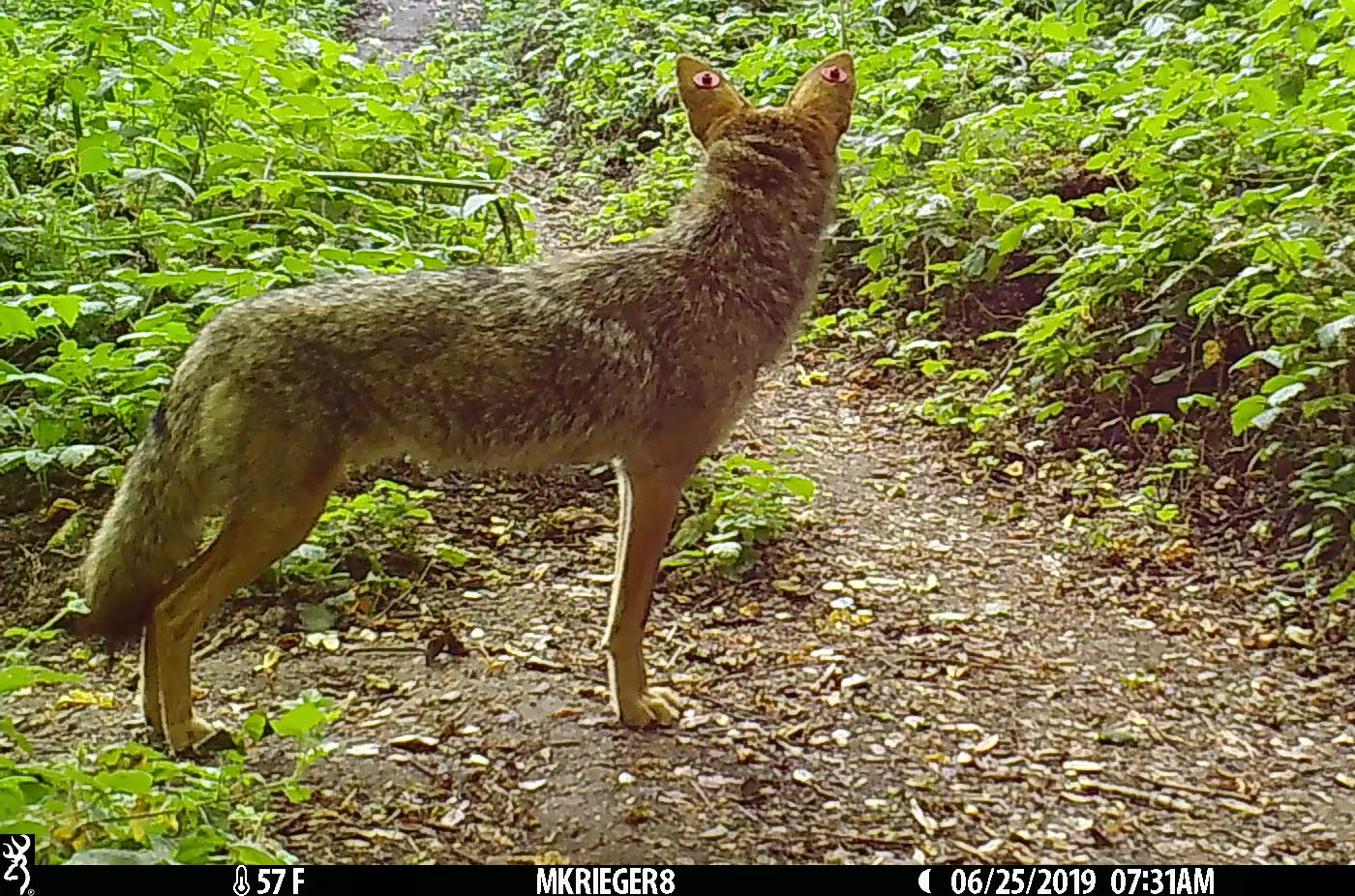 Coyote 09M is easily recognized by his red ear tags.

Despite having a high mortality rate, coyotes can survive in just about any environment. The secret to their success is their high intelligence, the ability to quickly adjust to situations and being opportunistic omnivores. Some individuals seldom make public appearances while others are bold, cruising busy, populated streets looking for food. 09M, our resident coyote is not an exception. Since he made the canyon his home, he’s been shy, never making public appearances, carefully avoiding people. His MO changed in the last month.

Coyote 09M is a survivor. Around 3 years ago he was born in The Presidio in San Francisco, and along with his siblings and mom was tagged and fitted with a GPS collar. He quickly learned the skills necessary for living in an urban environment and traveled 35 miles down the peninsula without becoming a vehicular victim. He crossed busy roads and highways and finally settled in my favorite little canyon where he’s thrived for almost two years.

He is now the only confirmed surviving member of his natal coyote family. Last summer, there was an unconfirmed sighting of 10F, his sister, in the southeast sector of the city. His dad was killed in July of 2019 and sadly, last week his mum was found in Pacifica, a town on the coast. She was forced from The Presidio because another female coyote challenged and won her home territory. Sadly she didn’t have the same car smarts her son has. 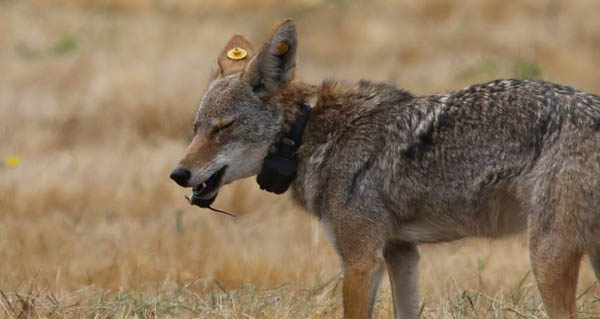 There was an unconfirmed sighting of 10F, Coyote 09M’s sister

Coyote 09M is not alone

09M is thriving in the canyon—although it’s only 93 acres, there’s plenty of food, water and cover. And, he’s now in a committed relationship with a lovely, healthy female coyote. Coyotes mate for life, forming cooperative partnerships. We have tons of footage of 09M and his mate hunting, eating, playing and loving together. Based on the videos, they’ve had at least one litter of pups.

09M usually maintains a cloak of invisibility on the trail. Until recently, he was seldom seen. I have been fortunate to occasionally catch a fleeting glimpse of him as he blends into the brush. The neighbors who live at the rim of the canyon and the staff at the nearby school sometimes hear him and his mate vocalizing. Once he followed me on my weekly camera checks. Although I didn’t see him, the cams recorded him sniffing the cameras and urinating next to them a minute or so after I checked them.

There’s been a recent change in 09M’s behavior. I hope it’s temporary. People have seen him during the day. One family’s accidental meeting with 09M is caught on camera. I’m not sure what prompted the change in his behavior. Perhaps his mate is in estrus. Another possibility is that he’s guarding a deer carcass. Two leashed dogs who accompanied the family may have also contributed to 09M’s behavior—perhaps he saw them as competition for the remains of the carcass.

The camera filmed the whole thing. Turn up the sound on your device. The camera is focused on 09M standing in the middle of the trail when the family spots him. They yelled and made a loud ruckus to scare him. 09M is seen licking his muzzle, indicating stress. He jumps away, runs up the trail and then down the bank. The walkers did everything right—it’s vital that coyotes remain fearful of people

Coyote 09M isn’t the only coyote who has a bold streak. Neighborhood on-line groups post sightings of urban coyotes every day. Although they are important for keeping rats in check, they should be discouraged from coming close to people and domestic animals.  If you happen to see Coyote 09M, easily identified by one red ear plug, or you see his relatives, scare them away. Scream, yell, jump and make a loud ruckus so they keep their distance. It’s also mandatory that when enjoying our open spaces that dogs are always kept leashed. Don’t let them run free in the wild places and open spaces. In addition to keeping dogs safe, it helps keep the other wild residents safe and the environment clean. Never encourage coyotes to hang around—clean up the garbage, pick up the pet food. Keep them wild—it’s for their safety.

Marilyn Krieger, CCBC, The Cat Coach and author of Naughty No More! helps solve cat behavior challenges nationally and internationally through on site and remote consultations. Her fascination with cat behaviors began with household cats and quickly expanded to wild felids.